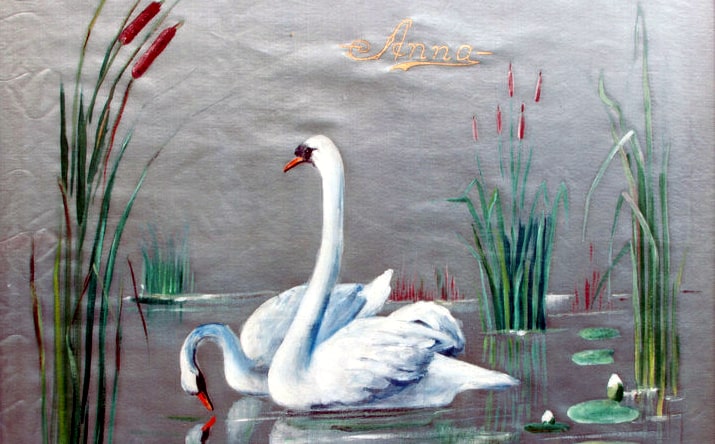 My brother remembers a silk pillow prominently display on the living room couch in our grandparents’ home at 21 Hawthorne Avenue in Hamden, Connecticut.1 The pillowcase dipicts two swans swimming among lily pads and cattails. It is inscribed with our paternal grandmother’s first name, Anna, and signed “Albinus Hasselgren, –05–.”

Albinus (Johan Albin) Hasselgren was an American artist who was born in Gävle, Sweden. In 1903 he left from Falun and in 1905 was working at the Worcester, Massachusetts, B&M repair shop (Boston & Maine railroad).2 He is known for painting rural scenes and religious works, including altar pieces for Lutheran churches. Hasselgren lived his last four years at a sanatorium in Westfield, Massachusetts, after being diagnosed with tuberculosis. He died during 1916 at age 36.3

Our mother, Dorothy Helen Jacobson (née Phillips), admired her mother-in-law’s painting and had it framed to hang in the living room at our home at 678 Buckingham Avenue in Milford, Connecticut. When she passed in 1997, I inherited the framed pillowcase. In 2015, I donated it to Historic New England (HNE record 2015.129.1).

This work by Bruce Jacobson is licensed under Creative Commons 4.0 International License—Attribution-ShareAlike.