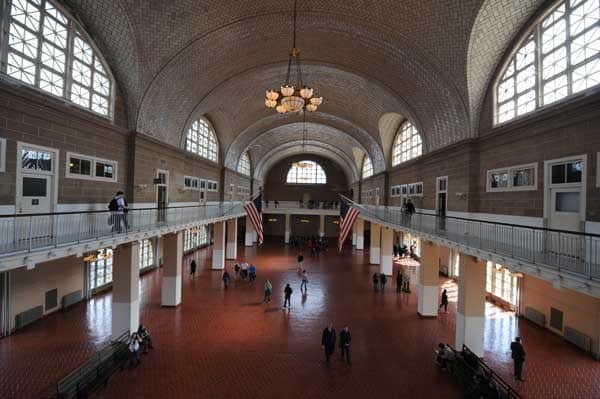 On the morning of Sunday, May 4, 1902, my grandfather, Carl Albin Jacobsson, boarded a ferry in lower Manhattan on his way to Ellis Island. He had traveled from Sweden with friends, and they had just spent their final night onboard the steamship Celtic, at New York’s dock No. 4 or 5. Albin was 26 years old.

“At 11 o’clock we arrived at Ellis Island, and I will never forget what I saw and experienced here even if I live to be one hundred years old.” Albin was put ashore with “a frightful number” of people from “every possible nationality.” In an account of his entire journey, titled “To America,” Albin describes the step-by-step experience of being processed as a U. S. immigrant.1

Around 1992, I took “To America” in hand and boarded the Circle Line Ferry at Battery Park, bound for Ellis Island. I made a journal entry describing my arrival experience some 90 years after my grandfather’s. I recall both the Park Service’s telling of the flow of people through the immigration station and Grampa’s matching in most every detail. I returned to Ellis Island on September 22, 2009, for an event associated with the National Park Service. My journal entry about that visit follows.

To me, Grampa’s and my experiences on Ellis Island encapsulate the immigrants’ American Dream.

I think my grandfather would be proud. On Tuesday evening I attended a black-tie event in the Great Hall at the Ellis Island immigration station. It is the same hall in which he was processed as a Swedish immigrant in 1902.

I was there with 500 people for a fundraising event. It was amazing.

First we watched the sun fade behind Lady Liberty, the yellow glow of her torch visible against the darkening sky. The white lights of the Verrazano Bridge arced over the harbor in the distance. Just across the water, the skyline of Manhattan throbbed.
It was magical.

Ken Burns and Dayton Duncan were there too. They wrote and produced the 12-hour movie about national parks that begins on PBS this Sunday. I spoke with both to thank them for first producing, and now promoting, the film.2

This work by Bruce Jacobson is licensed under Creative Commons 4.0 International License—Attribution-ShareAlike.

(Original 2015 post modified May 2019, following a new English translation of “Till Amerika.”)